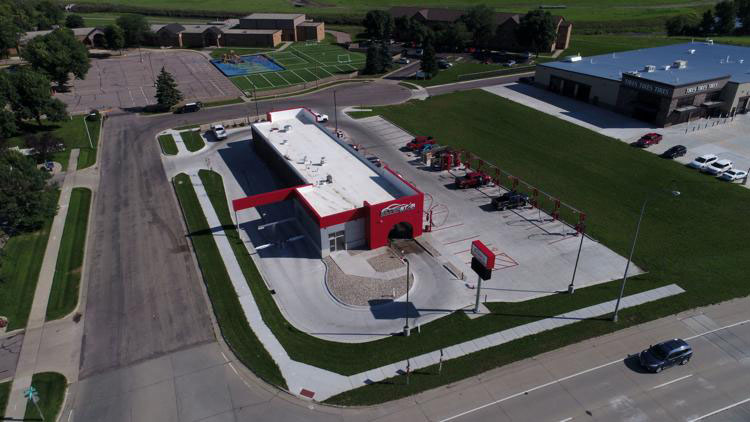 Silverstar Car Wash, a Sioux Falls-based car wash chain, announced recently it is expanding into the Sioux City market with three locations in Sioux City and one in South Sioux City.

Andrea Vetos, a regional manager with Silverstar, said locations at 1700 Hamilton Blvd., site of a former Applebee’s restaurant, and Floyd Boulevard next to Pizza Ranch, will open in 2020.

Construction is expected to begin next month.

The other two locations, at Cornhusker Drive in South Sioux City and a not-yet-determined spot near the Southern Hills Mall or the Lakeport Commons area, “should be open by the end of 2020.”

Each car wash will have one long “express tunnel”; the buildings each boasting about 5,000 square feet. The tunnels use a chain-and-roller system to pull cars through the wash while the owner sits inside.

Silverstar was an existing car wash in 2010 when co-owners and friends Bryan Slama and Ryan Holte purchased it. They built a second location in 2015, and subsequently built a third, fourth and fifth location. A sixth Sioux Falls location will be open in a few weeks, and they recently announced two locations in Brookings, South Dakota.

In Sioux Falls, Silverstar employs just over 100 people across its car washes. Slama said a similar number will be on the Silverstar payroll in Sioux City.

“We’ve been actually researching Sioux City for the past few years,” Slama said.

Sioux City and South Sioux City together have at least a dozen existing car wash locations, many not far from where Silverstar is planning to build. Slama said Silverstar will differentiate itself with “high quality service with a high quality wash at a convenient price.”

The company operates under the “express exterior” business model (there are several distinct business models for car washes), which emphasizes speed, automation and free vacuums.

Employees “prep” the vehicle by hand, scrubbing off bugs and washing the wheel wells, before the car is pulled through the wash by the chains and rollers.

Unlike some car washes, Silverstar offers an “unlimited wash pass,” which, for $14.95, allows customers all the car washes they have time for in a month. Vacuums and towels are free.